Grappling is a complex skillset with innumerable variables. In addition to technical complexity, grappling involves an ever-changing environment of training partners who each possess unique abilities and skillsets. Further compounding the issue is a skewed population of skill-levels: numerous beginners who lack perseverance and are transient, fewer intermediate practitioners, and lastly a minority of advanced ranks. The result is a training environment that is oftentimes less than ideal for any particular skill-level at a given time. Beginners are often overwhelmed while veterans are not sufficiently challenged. The intermediate practitioner perhaps profits the most, but is unfortunately rarely the numerical majority. The implication being that any serious practitioner must develop skills to cope with the inevitable frustration that is synonymous with grappling.

Frustration arises when our expectations are incongruent with reality. When frustration results from reaching a plateau, the inability to set sound goals may be a large part of the problem. In the challenging and ever-evolving environment that many grapplers find themselves, the ability to set goals can mean the difference between steady progress and stagnation. Ideally, goals are attainable, measurable, and can be defined within the limits of a finite timeframe (shorter periods typically being better). In other words, goals are behavioral in nature. Any behavior will increase in frequency if it is reinforced. Reinforcement in the grappling domain comes largely from the perception of success, usually in terms of besting other opponents.  Success, however, is relative. Consider the following example. Suppose there is a grappler with a quantifiable ability. For ease of discussion let us say this person possesses 5 out of a possible 10 skill-units. If this athlete were the member of a club where the average player possessed 3 skill-units, it is likely that he would perceive himself as successful – although in reality he is average. This perception of success has significant consequences: it is likely this individual will train harder and more frequently. Thus, the behavior of training is reinforced, resulting in an increase of skill while at the same time increasing the likelihood the behavior will continue when not reinforced – when reaching a plateau, for example. Now let us suppose this person were a member of a team who on average possessed 8 skill-units. The converse would likely hold true though the athlete is identical in both instances. Accordingly, by understanding the relativity inherent in any training environment, a grappler can remain motivated and set goals that are conducive to growth.

The following are some examples that almost any grappler can use to increase motivation and that illustrate the principles of sound goal setting.

·     Make sure training goals are realistic. It is not always possible to define successes in terms of a decisive victory over an opponent. For example, it is unrealistic for a beginner to have the expectation of overcoming a seasoned grappler. In this instance, success could be defined in terms of avoiding a particular submission or attaining a positional advantage.
·     Pick a finite number of skills to improve and continue practicing those skills until results are seen. Fundamental techniques are well suited for this. They have endured they test of time for a reason, and any investment of effort will yield many dividends while laying the foundation for more advanced skills.
·     Beginners often confuse the difference between knowing a technique and being able to execute a technique.  A skill must be practiced many times before it will be successful in a live environment. Do not give up on a technique if it is not initially successful. It is not uncommon to see an individual abandon a skill just when they are on the cusp of attaining it.
·    Come to practice with a well-defined goal. What specifically will you train? How many times will you do it? How will you know when you have achieved your goal? Break large goals into smaller objectives. For example, the goal of improving one’s guard is too ambitious. The guard has many facets and can take years to develop. Instead, pick a specific technique and develop that technique. In this fashion, you will progress steadily.
·     Spend a few minutes reflecting after each practice. What did and did not work?  Look for small successes: I got a good workout, I was able to get into position for a particular submission, or I contributed to the development of the group by participating although I was discouraged.
·     Make a firm commitment to train no matter what the results. For example, you may decide that you will practice three times a week for six months regardless of success or failure.
·     Above all, remember that you are a part of a larger group.  It can at times be helpful to take the focus off oneself. The challenges you are facing may very likely be providing growth for others.

By understanding and applying these principles, it is possible to reframe one’s frustrations into a series of attainable goals that will ultimately result in growth. The ability to set sound goals is not difficult skill to learn, but it is often neglected. However, once put into practice, like many other skills learned on the mat, can be applied to our everyday lives.

Contributor Bio – Robert is a judo nidan, Brazilian jiu-jitsu blue belt, and has a master’s in mental health counseling. He is the head instructor of the University of Kentucky judo club and a member of the Valhalla Grappling Academy. 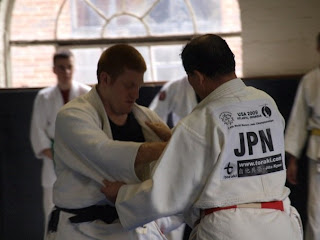