Facebook Email YouTube Phone
Many people think of grappling a simply a series of well-defined positions. The guard, mount, back mount, north-south, etc. However, there is more to it than that. There is  small but significant part of each match during which no one has the advantage and no one has any thing that resembles a definable position. This is called “the scramble”.
Consider the moment after a failed takedown. Just after you dove for an armlock and missed. When your opponent has swept you half way and you are both lying on your sides staring at each other. In these situations whoever takes the initiative, moves first, and stays aggressive will end up in the best position. He will win the scramble.
Winning the scramble leads increases your chances of coming out ahead at the end. If you can take control of the match every time there is a mistake (yours or your opponent’s), you will spend more time in positions of advantage. This allows you to rest and recover, keeps you safe from attacks, exhausts your opponent, and gives you more opportunities for attacking.
Dominating the scramble also demoralizes the opponent. If he knows that every time he makes a mistake you will capitalize on it and that every time you make a mistake you can recover before he takes advantage of it, his morale will sink. Do not underestimate the power of the psychology in the outcome of a match or fight.
So what does it take to win the scramble and how can you train to get better at it?
Anticipation – Be aware of the flow of the match. You should never be ‘surprised’ to find yourself in a certain position. At any given point there are a finite number of things that can happen. Always be moving to the ‘best’ position in any given situation. This requires hours of live grappling, positional drilling, and experience.
Athleticism – Staying in control requires you to move first, move fast, and keep up the pressure until the scramble settles. To do this effectively you need to be strong, powerful, balanced, and agile. A certain amount of this is genetic but a solid strength training program combined with sport specific movement drills can improve anyone’s athleticism.
Conditioning – Fatigue makes people slow and breaks their will. When severe fatigue sets in you will miss your opportunities. Mentally you become less aware and less determined. You will find yourself responding too late if at all to your opponent’s actions. What’s more is that fatigue actually saps your will to continue and may cause you to simply give up. The answer to this is simple – spar, drill, do your conditioning, and get in better shape.
Brian Jones, PhD 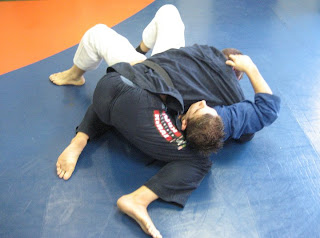