Facebook Email YouTube Phone
For most beginners the guard position is something of a puzzle. They get stuck in closed guard by a more skilled opponent and simply don’t know what to do. The new trainees might try a submission from inside the guard or simply move wildly until their lack of balance gives the opponent an easy sweep.  Even more advanced trainees can get in the habit of “working in the guard” rather than “working through the guard”. They get comfortable and forget that their actions should be goal directed.
So what exactly are the goals from guard? An easy mnemonic is to remember “the three P’s” of guard top. They are passing, punching, and pinning. I include punching for completeness even though strikes are not allowed in sport jiu-jitsu, judo, and submission wrestling. Grappling should always be considered in a cross-contextual way so that mindset and tactics don’t require dramatic changes when moving from mat to cage to parking lot. In other words, never forget that you could strike.
A general principle is to never attempt a submission on your opponent from inside the guard. Yes people do occasionally get choked, arm barred, or neck cranked by the person on top. However, it is not tactically sound to focus on these submissions as part of your fundamental game. They typically happen only when there is a major size/strength advantage. Likewise, leg locks are available when the opponent opens his guard. These should also not be considered fundamental attacks for two reasons; (a) they place you in poor position if they fail and (b) you will expose your own legs to attack most of the time. So for clarification, unless you are freakishly strong and only roll against people smaller and weaker than you or you are a leglock master, focus on the three P’s. 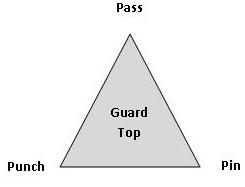 Passing – Although top position is dominant, staying in someone’s guard gives them an opportunity to attempt submissions. Certainly you can defend these submissions – but why stay there and give your opponent multiple chances? You could eventually get caught. The tactic of passing includes all of the standard passing techniques but also picking your opponent up to slam him (when the context allows this) or disengaging completely from the ground by backing out and standing up.
Punching – In the context of mma and self-defense, striking the opponent from the guard can be devastating. One only has to look at all the victories due to ground-and-pound in modern mma. Advantages of punching from the top include the use of gravity to add power and the opponent’s inability to roll with the strikes. It is important to practice proper ground and pound technique because improperly executed strikes can get you submitted or swept. Included in the punching category are strikes to the head or body using the fist, hammerfist, or elbow. In a self-defense situation, headbutts may also be included. Obviously, you should not strike when the context does not allow it.
Pinning – Just as from the bottom guard position, it is occasionally necessary to stall out the match. This could be to catch your breath, or to recover from getting hit during a successful takedown. The key is to pin the hips of your opponent by keeping your head tight to his stomach and pinching your elbows tight against his sides. Follow him as he tries to scoot away and maintain your straight line position so that he can’t take an angle for attack. You can use this to prevent him from standing or attacking with submissions.
Brian Jones, PhD