Facebook Email YouTube Phone
The fundamental idea behind defense in grappling is to stop one of the necessary steps in the completion of the technique. This is true whether you are talking about a submission, sweep, or takedown.  Offense can be thought of a set of sequential steps much like a string of Christmas lights. If you take out a single bulb, everything downstream goes out. This means that a thorough understanding of offense will help you more effectively defend. You know what your opponent is trying to do and you can work on preventing it. Likewise a thorough understanding of various defenses will improve your offensive game. Learning defense highlights the key points of the attack.
Layers of Defense
Awareness
Knowing which attacks are possible from various positions is vital, as is knowing how to position yourself so that your opponent has fewer targets. Consider the principle of “elbows in”. As a rule you are much safer on the mat if you keep your elbows bent and tucked near your body. Arm and shoulder locks require that the opponent isolate and extend your arm. With your elbows in this is difficult to do. If the opponent tries you have more warning and are in a better position to defend. Awareness of your elbow position at all times and the vulnerability of extending the arms will make you less likely to get submitted with an armlock.
Block
A block prevents the opponent from finishing his technique. However, it does not get you out of the dangerous position. If at any point you stop blocking, the opponent may be able to complete his attack. A block gives you time to improve your position and will often cause your opponent to give up on the attack. Consider a double leg takedown. The opponent attacks you with a shot and you sprawl. He has both arms around your right leg but is flattened out on the mat by your hip pressure. At this point you have effectively blocked the technique. If you stop blocking and relax your sprawl, taking away the pressure, your opponent will pull in your leg and finish the takedown.
Escape
Escaping a technique involves stopping the opponent’s attack then getting out of the dangerous position. It is helpful to remember that this is an extension of the block. If you don’t first block the technique, you can be submitted as you are attempting to escape.  If your opponent attacks with an armbar from mount and you block it by bending your arm and grabbing your gi, you have to keep your elbow bent during the escape. Straightening your arm during the escape attempt will give him the armbar regardless of what you are doing with the rest of your body. Remember to block first and keep blocking as you escape.
Counter
The highest level of defense is the counter. Here you block or avoid the opponent’s attack and apply your own attack. Anticipating an opponent’s attack is very difficult so counters often require you to draw out an attack by baiting. In other words, you have to leave yourself open to a particular type of attack so that your opponent will attempt it. Unless you have the counter fully mastered this strategy could backfire. An example would be to bait your opponent into attempting to triangle choke you from the guard by putting one arm between his leg and your body. As he goes for the choke you block his leg so that he cannot trap your head and arm and move around the side into the pass. 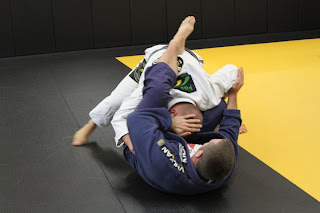 3 thoughts on “A Guide To Defense”