Facebook Email YouTube Phone
“If the enemy holds the high ground, do not ascend and do battle with him” – Sun Tzu
While there are many opportunities to defend oneself and initiate attacks from the bottom, fighting from the top has significant advantages. Here are some points to keep in mind when fighting from the top-position.
To begin, let us first consider the relative strengths and weaknesses of each position. The man on the bottom rests on the ground, and because of this he is able to use his legs to his advantage. In addition, he can post off of the mat to initiate attacks, all without fear of losing his balance or being reversed. Momentum, mass, and mobility, work to the advantage of the top-position. The man on the top can use his legs for mobility. His mass pins his opponent and adds to the momentum of his attacks. The key to the top man’s success lies in his ability to generate momentum and use gravity to his advantage — this is where the base becomes important.
To understand the role of the base, we need only follow the transmission of force through the body. Consider the following example: an individual in a boat is unable to win a tug-of-war contest against someone pulling from the shore, irrespective of their size. Although, as in this instance, the arms pull, without a base pushing in the opposite direction, force cannot be transferred to an external object. Knowing this, the bottom man will seek to nullify your base by attempting a reversal or bending you forward at the waist. The adage that a chain is only as strong as the weakest link holds true here. The midsection links the torso with the base. When bent forward, the strongest muscles of the body, namely the abdomen and the loins, are rendered useless. Once in this position it is difficult to fend off attacks from the bottom. In addition, because your center of gravity rests outside your base, your opponent will find is easy to unbalance and sweep you. This is why Judoka prefer an upright posture when fighting from a standing position. It also explains the importance many martial artists place on the hara.
With an understanding of the importance of the base and posture, it is possible to infer some general strategies of the top-position. First, as mentioned earlier, the legs must be utilized both for mobility and to transfer power to the extremities. To do this effectively involves utilizing the first principle of the top-game – passing the guard. Unless you have already secured a positional advantage with a throw or takedown, passing the guard must become your first priority. Many inexperienced grapplers skillfully pass their opponents legs only to find that they lose their hard won position. One common reason for this is that, having passed the legs, there is a tendency to reach too greedily for the shoulders and head. Work methodically through the pass. The subtleties of any pass will usually lie in controlling the opponent’s hips. When passing the guard the devil is truly in the details. Pick a handful of passes and practice them religiously.
Once you have secured a top-position, take full advantage of the natural levers of the neck and shoulders. By pinning the opponents head to one side or another you will greatly diminish his ability to bridge or shrimp in the opposite direction. The same can be accomplished by overwrapping the neck. Knowing to which side your partner will escape is a tremendous advantage. Advantages such as these are key when pinning a larger or stronger opponent. The shoulders are the largest lever along the spine. From a standing position, any rotation along the axis of the shoulders will bring you opponent off balance. On the ground, control of the shoulders will keep your partner from rotating to his side and regaining his guard or base.
Lastly, lead your opponent into a submission through his own efforts to escape. If you have to press the submission it is likely that you have not developed a tight top-game. Once an opponent is sufficiently pinned he will find it extremely uncomfortable and inevitably expose himself to submissions. Within the confines of grappling as sport, there may be some advantage to stalling from the bottom, for example, if you are winning and there is little time left on the clock. You will, however, see few Mixed Martial Artists employ this strategy. An adversary will gladly rest on top of you as he strikes with impunity. Learn how to escape pins and practice regularly. You will learn much about position through escapes.
In summary here are some key points to remember:
1.      Do not forfeit the top-position by pulling guard.
2.      When standing, resist the urge to bend forward at the waist. Although this will lower you center of gravity, you will lose power, balance, and mobility.
3.      Practice the transition from throws to groundwork. Often an opponent will be disoriented or incapacitated from the fall. Use this as an opportunity to pass the guard. Do it skillfully, however, or you may find yourself on the bottom.
4.      If the opponent closes his guard, use stand-up passes whenever possible. Make passing the guard your first priority.
5.      Be certain to control your opponent’s hips and midsection as you execute the guard pass.
6.      Utilize the levers of the neck and shoulders to tighten the position and expose your partner to submissions.

Contributor Bio – Robert is a judo nidan, Brazilian jiu-jitsu blue belt, and has a master’s in mental health counseling. He is the head instructor of the University of Kentucky judo club and a member of the Valhalla Grappling Academy. 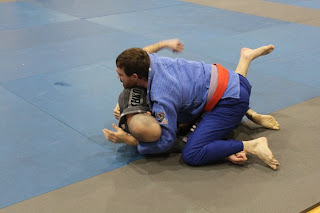